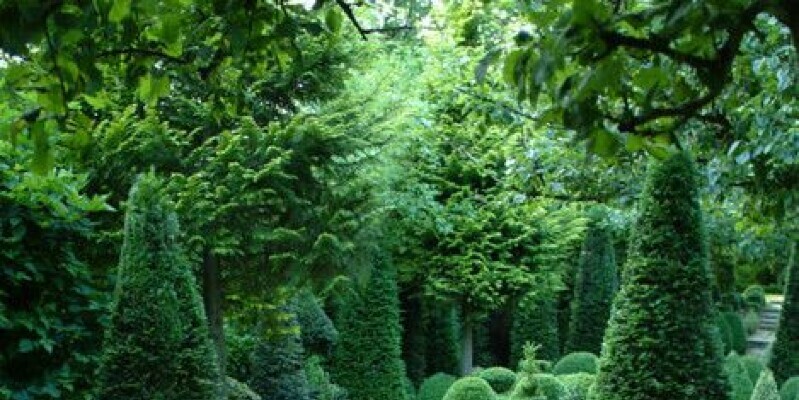 The perennial banana plant, which is from the genus Musa, grows from underground stems called rhizomes. The herbaceous plant, commonly but erroneously known as a “tree” because of its size — to 25 or more feet tall, has an unusual life cycle. It matures and grows bananas in 10 to 15 months; after yielding bananas that take four to eight months to ripen, the plant dies and is replaced with a different plant that goes through the same life cycle. A banana rhizome can live hundreds of years.

Bananas are native to tropical and subtropical areas of Asia and need 10 to 15 months of frost-free states to produce a flower stalk. Decorative varieties give a tropical appearance to a landscape. Only the hardiest varieties continue to develop when the temperature drops to 53 F, and fruiting varieties need 10 to 15 weeks of frost-free weather in order to cultivate a flower stalk. The flowering banana (Musa ornate) may develop in U.S. Department of Agriculture (USDA) zone 8. Fruiting varieties grow in USDA zone 9 but don’t produce fruit; they yield bananas, so-called berries, in secure regions of USDA zone 10 and in zone 11.

Banana stalks, known as pseudostems, are formed by leaves two to 9 feet long that spiral upwards from suckers growing on an underground rhizome. Growers predict these suckers pups. The spiraling leaves wrap around themselves, forming a hollow cylinder. An actual stem rises through the center of the cylinder. When the plant matures, a whorled bunch of blossoms grows in the tip of the stem. After the blossoms yield bananas, which develop in bunches called hands, the stalk dies and is replaced with another sucker growing in the rhizome.

Cultivated bananas don’t have seeds. Exactly what were once seeds seem as small, brown specks from the faintly pithy or marginally hollow center of overripe bananas. Varieties of wild bananas have little flesh on their fruit, but they’ve tough, curved or angular black seeds in 1/8 into 5/8 inch broad. Growers propagate seedless domestic cultivars in the limbs that develop in their perennial rhizomes.

Banana growers usually allow one plant to acquire a six- to eight-month head start on its growth cycle prior to choosing the most effective of the remaining shoots on its rhizome to replace it and lift bananas. They prune the other, weaker shoots. After a plant matures and yields bananas, then they cut its stalk into the floor and chop it for use as mulch.